The neurotransmitter dopamine is one of the most fascinating substances regulating behavior, with both delightful and dark qualities. Affecting a mere 20,000 dopamine-responsive neurons out of 100 billion neurons in the human brain, dopamine nonetheless governs critical aspects of our existence including voluntary movement, psychosis, and addiction. Disrupted dopamine signaling is involved in maladies ranging from Parkinson’s disease to schizophrenia.

Although dopamine is responsible for much of what makes us human, it is not by any means exclusive to humans. Dopamine receptors are conserved widely throughout vertebrates and invertebrates—including the nematode C. elegans, which displays dopamine-dependent behaviors such as the ability to slow its rate of locomotion in the presence of a bacterial food source (a helpful trait for hungry worms). A recent publication by Likhite et al. in Science Signaling leveraged this evolutionary conservation to shed light on a previously unknown mechanism for dopamine signaling: post-translational modification of dopamine receptors by arginine methylation.

Histones are classical substrates for protein arginine methyltransferases (PRMTs) such as the highly conserved PRMT5, which methylates arginines in specific amino acid motifs, transferring either one or two methyl groups from S-adenosyl-L-methionine (SAM) to form monomethyl arginine (MMA) or symmetric dimethylarginine (SDMA). Hints at the existence of non-histone PRMT5 substrates had occurred when a proteomic study published in 2003 reported that an antibody specific to SDMA reacted with a group of GPCRs in humans. It took over a decade to definitively determine the identity of one of these GPCRs.

Likhite et al. began the search with bioinformatics, finding 300 human GPCRs with a total of 583 predicted RGG or RXR methylation motifs within their intracellular domains. Of these, seven sites were conserved in C. elegans—including that of a D2 dopamine receptor.

The hunt was on, and the bioinformatics postulations were investigated using the power of biochemical assays. An in vitro methylation assay with a recombinant fragment of human D2 dopamine receptor confirmed that D2 was methylated by PRMT5. After narrowing down the methylated arginines to R217 and R219, the authors showed that substitution of these residues with alanines, which can’t be methylated, disrupts agonist dependent inhibition of cAMP production. (D2 signals through Gαi subunits to inhibit cAMP production). Conversely, overexpression of PRMT-5 increased inhibition of cAMP production by a D2 agonist. A similar approach confirmed that the C. elegans DOP-3 dopamine receptor, like human D2, is methylated by PRMT5.

At that point the fun really began: biochemical results could be correlated with organism responses. C. elegans prmt-5 mutants are viable (unlike mice lacking PRMT5 which die during in early development), making it possible to examine dopamine-dependent, methylation-regulated behavior. One such behavioral assay is analyzing the sensitivity to the aversive odorant octanol. Wild type worms do a double-take upon encountering octanol, reversing their movement to avoid the substance. A normal response requires intact dopamine biosynthetic and signaling pathways; perturbation of dopamine synthesis or loss of function of DOP-3 causes hypersensitivity to dilute octanol. This hypersensitive behavior was phenocopied in prmt-5 mutants and could be corrected by expressing PRMT-5 in specific sensory neurons required for the behavior.

In a second set of behavioral studies, the authors assessed reduced locomotion upon encountering a bacterial food source. This is referred to as the basal slowing response of C. elegans, and it, too, requires intact endogenous dopamine biosynthesis and signaling: dop-3 mutants don’t decelerate when they encounter bacteria patches, moving right by the food source. Additionally, dop-3 worms don’t respond normally to exogenous dopamine, which paralyzes wild type worms but doesn’t affect the mutant. Once again, prmt-5 mutants phenocopied dop-3 mutants, indicating that arginine methylation and dopamine signaling are both required for normal locomotive responses to dopamine. The response could be rescued by expressing wild type PRMT-5 in the cholinergic motor neurons of prmt-5 mutant worms. Lastly, the authors identified R208 and R210 as methylation sites in C. elegans DOP-3. These residues correspond to R217 and R219 of human D2 receptor, and are in a highly conserved RXR motif in the third intracellular loop.

The significance of this work is profound. Currently available dopamine D2 receptor agonist drugs for schizophrenia and Parkinson’s disease have drawbacks. Despite an array of agonists available to treat schizophrenia, most are ineffective at managing all symptoms and are accompanied by serious side effects. For Parkinson’s disease, treatment with L-DOPA diminishes in effectiveness over time. New drug classes are urgently needed, and the research of Likhite et al. suggests that manipulation of dopamine GPCR methylation status may be a course of action worth pursuing. Additionally, considering the broad range of diseases involving aberrant GPCR signaling such as chronic heart failure and many types of cancer, it is likely that arginine methylation of GPCRs will continue to be a hot topic for further research. 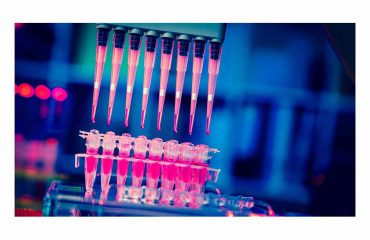 Using TBK1 Inhibitors to Stop Cancer in Its Tracks