It’s fitting that the last blog in this series is on histone demethylases (HDMs), since there was little interest in histone methyltransferases (HMTs) as therapeutic targets until the discovery of specific enzymatic demethylation of histones in 2004, which indicated that methylation is a dynamic, reversible regulatory system like phosphorylation.   The demethylases are now being explored as targets in their own right as they are over-expressed in a number of different cancers.

There are two main families of HDMs, which differ in the catalytic mechanisms and cofactors.  The two lysine-specific demethylases, LSD 1 and 2, are FAD-dependent monoamine oxidases, that demethylate mono- and dimethylated substrates; the products of the reaction are hydrogen peroxide, formaldehyde and the demethylated substrate.  The Jumonji family, which has at least thirty members, relies on a dioxygenase reaction with Fe(II) and α-ketoglutarate cofactors to demethylate mono-, di, and tri-methylated substrates resulting in the formation of carbon dioxide, succinate, and formaldehyde along with the demethylated substrate.  Pretty messy reactions! See the great review by Kooistra and Helin in Nature Reviews in Molecular Cell Biology for more detail on the molecular mechanisms, functions and disease links and another by Dante Rotili and Antonello Mai that is focused on demethylase genetic aberrations  in cancer.

Demethylase assays developed to date rely on detection of the hydrogen peroxide or formaldehyde by-products via coupled assays or immunodetection of demethylated or methylated peptides – the latter being a substrate depletion assay.  The coupled assays rely on a variety of mechanisms.  Hydrogen peroxide formed by the LSDs can be reacted with Amplex Red in the presence of peroxidase to form a fluorescent resorufin product (Ex 570 nm, Em 590 nm).  Formaldehyde, which is formed by all demethylases, can be oxidized to formic acid by formaldehyde dehydrogenase along with reduction of NAD, which is then detected by absorbance (340 nm) or fluorescence (340/450 nm).  Alternatively formaldehyde can be reacted with ammonia and acetoacetanilide non-enzymatically to form a fluorescent dihydropyridine product (370/470 nm).   The peptide detection assays have been formatted for TR-FRET and Alpha Screen detection.  Most of these approaches are described in the publications listed below.

The obvious downside to the coupled assays is the potential compound for interference with the coupling enzymes, which requires additional controls or a counter-screen.  The peptide based assays require separate antibodies for each methylation and/or demethylation site and require heterogeneous assays for native substrates.  There is a brief overview of the different methods in this open access review by Amy Quinn and Anton Simeonov at NIH. 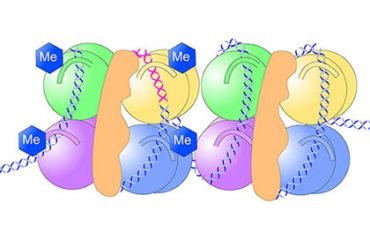 Histone Methyltransferases: What we’ve learned about enzymes and substrates