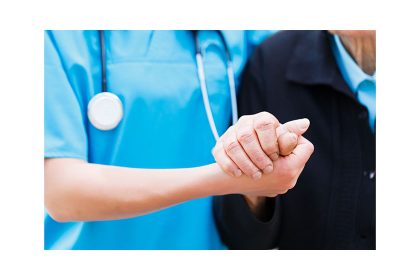 As we continue to increase our lifespan, diseases such as Alzheimer’s will subsequently persist to develop. With up to 4.5 million Americans currently affected, there’s a strong desire to find a cure or at the very least some relief from the symptoms.¹   Neurodegeneration derived memory loss is the most common and perhaps the most devastating result of the disease. It’s not just forgetting a name or face, but losing the ability to do routine tasks such as shower and make breakfast.

Although there is a genetic component found in Alzheimer’s Disease (AD) there are hallmark features that people associate with the disease such as amyloid plaques, neurofibrillary tangles, and neuronal loss. The toxic clustering of proteins and neuron damage has a consequent harmful effect on nerve cell synaptic connections.

Can PDE Inhibition Unlock A Treatment?

Of particular interest is a specific type of synaptic strengthening, long-term potentiation (LTP) which is involved in memory and learning. In this process, a protein known as cAMP-responsive element-binding protein (CREB) gets phosphorylated in order to activate transcription in memory-related genes.² cAMP triggers the phosphorylation. To regulate this signaling pathway, a special enzyme, cyclic nucleotide phosphodiesterase (PDE) catalyzes the degradation of cAMP. Obviously, this pathway is ripe for causing memory associated issues if not in optimal working condition.

As PDEs are key elements within the cAMP cascade, it’s no surprise that many neurodegenerative diseases including Alzheimer’s are associated with anomalies found in these cyclic nucleotide enzymes. Recent studies have found that inhibiting PDE activity has therapeutic potential for patients with (AD).³

An exciting study by Bartolome et al identified S14, a small heterocyclic molecule, as an inhibitor of phosphodiesterase activity. Specifically, S14 is able to inhibit the cAMP-specific PDE7; restoring visual short-term memory.³   In addition to upregulating neurogenesis, the administration of the PDE7 inhibitor increased cAMP and CREB levels in the hippocampus.³   These findings suggest S14 is a promising therapeutic for fighting memory loss for those suffering from AD.

The following data set provides an example of using the Transcreener AMP²/GMP² Phosphodiesterase Assay with PDE7A to determine inhibitor potency. In the first graph, the enzyme is titrated in the presence and absence of cAMP. 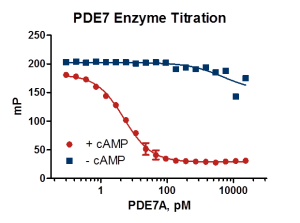 An example dose-response with two known PDE7 inhibitors demonstrates the assay’s ability to measure compound potency. Using the assay to perform a high throughput screen can yield a variety of potential inhibitor chemotypes that can be further developed using SAR to improve drugability. New, more potent, and selective inhibitors for PDE7 could potentially provide treatment options to AD. 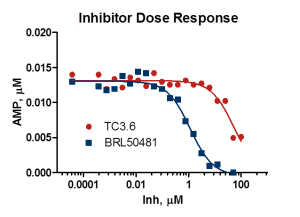 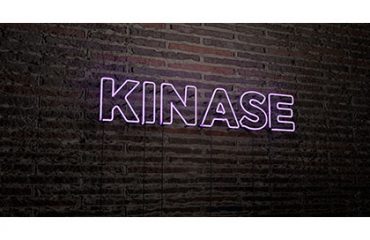 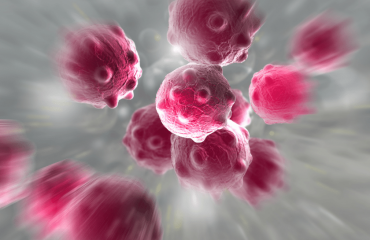 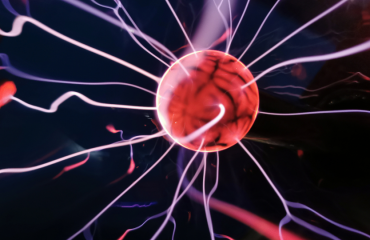