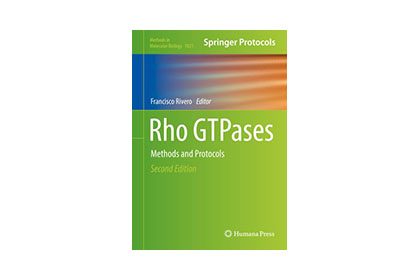 New Protocol from BellBrook Labs: High-Throughput Assay for Rho GEFs Based on the Transcreener GDP Assay

In this new second edition of Springer Nature’s Rho GTPases: Methods and Protocols, researchers from BellBrook Labs describe an HTS compatible method for detecting GTPase exchange factor (GEF) activity. The protocol described in chapter twelve of the book uses the Transcreener® GDP Assay to measure the GEF modulation of its partner Rho GTPase based on the release of GDP. GDP dissociation is the rate-limiting step of the GTPase catalytic cycle and GEFs stimulate GTPases which enhance the rate of GDP formation by the enzyme. The changes in GDP produced can then be monitored by the Transcreener GDP Assay.

The assay technique is a competitive fluorescence polarization immunoassay that enables detection in a simple homogenous format. This facilitates high throughput screening, making discovery of novel GEF inhibitors more streamlined. Since the assay is dependent on catalysis, it allows for discovery of inhibitors with a variety of mechanisms of action when compared to other methods like GTP binding assays. And since the Transcreener Assay monitors the product formed (GDP), it can be used for virtually any GEF/GTPase pair.

In the chapter Lowery and Kumar detail the materials and methods used for preparing and performing a screen for Rho GEF inhibitors. Rho GTPases Cdc42 and RhoA are used with GEF hDbs DH/PH in the examples presented to describe assay development. A pilot screen using PIP3-dependent Rac exchanger (P-Rex) along with Rac1 was used to illustrate a sample data set for screening analysis. The detailed protocol provides researchers with a powerful tool to screen vast compound libraries for new GEF inhibitors.