Aurora A Kinase, along with -B and -C, are members of a family of serine/threonine protein kinases that play critical roles in coordinating mitosis, including establishment of the mitotic spindle, centrosome duplication, centrosome separation as well as maturation, chromosomal alignment, spindle assembly checkpoint, and cytokinesis. The enzyme’s role in coordinating mitotic events is intricately regulated through phosphorylation, dephosphorylation, and degradation.1 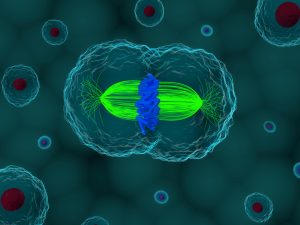 Aurora A is able to phosphorylate diverse substrates, making it vital in regulating spindle fiber alignment of chromosomes in anaphase for normal centrosome separation.

Aurora-A is frequently overexpressed in cancers, and its dysregulation is believed to drive tumorigenesis by causing chromosomal instability and tumor cell heterogeneity 2,3 Research on abnormal Aurora A kinase levels have shown centrosome amplification, aneuploidy from failure in cytokinesis, and cell transformation in cases of over-expression which can be linked to carcinogenesis and tumorigenesis.3

Though the first Aurora kinase inhibitor, alisertib, entered the clinic several years ago, success has been limited possibly because of inhibition of Aurora B and C as well as off-target effects on unrelated proteins.  In an effort to overcome these specificity issues, a group at Eli Lilly, led by James Henry, used Bellbrook’s Transcreener assay to facilitate development of an aminopyridine that inhibits Aurora A kinase with an IC50 of 1.12 nM, and is more than 1000-fold less potent for Aurora B.4

Very recent studies have revealed that Aurora A acts as a positive regulator of the Yes-associated protein (YAP), a downstream effector in the Hippo pathway, which regulates tissue homeostasis and organ size during development. 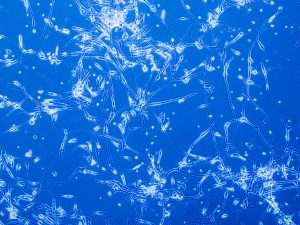 Inhibition of Aurora A Kinase in glioblastoma-initiating cells is a promising strategy for reducing tumor recurrence.

The study determined that Aurora A kinase acts as a positive regulator of YAP-mediated transcriptional machinery primarily in the nucleus. The functional relevance of this newly discovered regulatory axis is found to be highly correlated with triple-negative breast cancer, suggesting that an inhibitor for Aurora A will be valuable in similar cancers.5

Additionally, Aurora A kinase plays an unexpected role in systematic tumor recurrences of glioblastoma, which opens new possibilities for selective inhibitors in treating one of the deadliest cancers.6