Get the Case Study

The Only Mix-and-Read Fluorescent GTPase Assay

The Transcreener GDP GTPase assay is a homogenous, fluorescent immunoassay that monitors the activity of GTPases along with GEF and GAP partners. The assay directly measures the amount of GDP produced in an in vitro GTPase reaction.

GTP hydrolysis from GTPase activity creates the product GDP and an additional phosphate. GDP displaces tracer from a highly selective monoclonal antibody resulting in a decrease in fluorescence polarization and TR-FRET or an increase in fluorescence intensity - perfect for your high throughput screen!

What Can You Do With Transcreener

Assay Tunable to Your Target 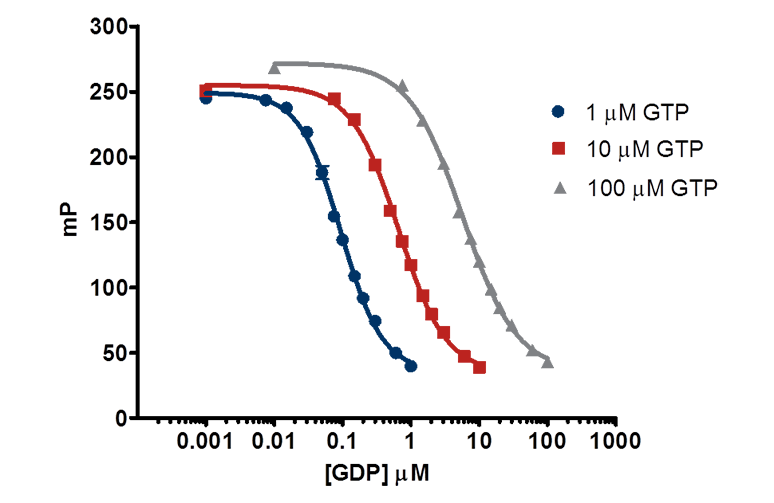 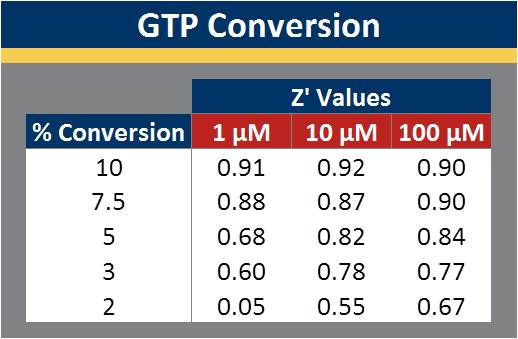 Standard curves mimicking the enzymatic conversion of GTP to GDP using the Transcreener GDP FP Assay. The dynamic range of the assay can be easily tuned for different initial GTP concentrations. Excellent Z' values are achieved even at low GDP reagent formation.

Use with a Variety of GTPase Enzymes

Based on BellBrook Lab's proprietary nucleotide immunodetection technology, the Transcreener GDP Assays are compatible with any enzyme class that produces GDP, including monomeric small G proteins, such as CDC42, and Gα subunits of heterotrimeric G proteins, such as Gαi1. Learn how Transcreener can be used to study targets like Cdc42 and RhoA in Springer's Rho GTPases Methods and Protocols. Discover how researchers at UT Southwestern used the GDP assay to screen dynamin GTPase activity. 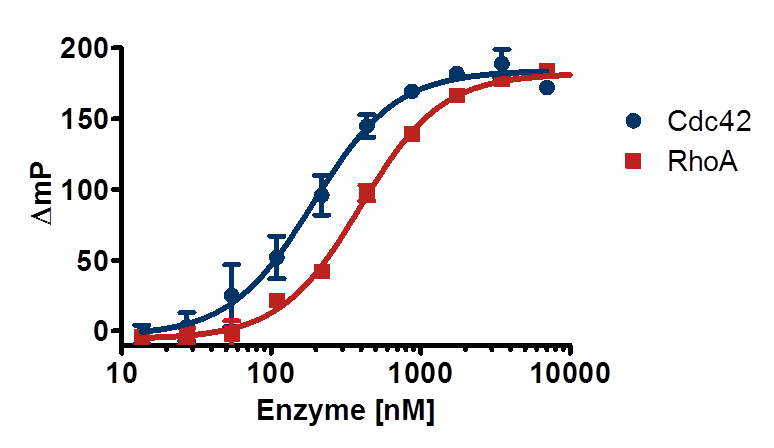 GTPases act like switches and control a variety of cellular processes as they cycle between inactive (GDP bound) and active (GTP bound) conformations.  GTPases form a relatively large family of enzymes, all of which are characterized by the ability to hydrolyze guanosine triphosphate (GTP) to guanosine diphosphate (GDP).

Many cellular processes are modulated by GTPases including actin cytoskeletal organization, cell growth, proliferation, differentiation, and survival. For these reasons, GTPases have become a target for many diseases including cancer, Alzheimer’s and Parkinson’s.

Small GTPases include the Ras, Rho, Rab, Arf, and Ran subgroups. Mutant K-Ras proteins are significant drivers of human cancers and may play a direct role in about one million cancer cases per year. Ras GTPases are important targets in drug discovery and development, as genetic alterations in Ras GTPase are very common in human cancers. 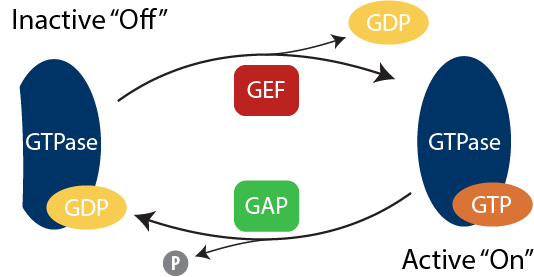 Rho family GTPases control cell growth, movement, and gene expression and are often misregulated in cancer pathways, especially cell migration and invasion. However, Rho GTPases are infrequently mutated and their tumorigenic functions are often mediated by overexpression of GEFs which positively regulate.

Unlike GTP binding assays, the Transcreener method is based on multiple catalytic cycles for both the GEF and the GTPase with an unmodified GTP substrate making it is a more direct measure of GEF’s intrinsic functional activity.

In addition to our GDP Assays, Bellbrook Labs also offers the following products and services to aid in the drug discovery process: