Learn More About the Method Used for the NUDT5 Assay.

Talk to a Scientist

The kit comes complete with the detection reagents required to measure activity. NUDT5 enzyme & ADPR is not included in the inhibitor screening assay kit. Please contact us for questions related to acquiring the enzyme.

How Does This NUDT5 Assay Work?

The Transcreener NUDT5 Assay determines NUDT5 enzyme activity by directly measuring AMP formed by the enzyme using the Transcreener AMP2/GMP2 Assay. By detecting AMP output, the assay provides a universal method to assess the activity of any AMP-producing enzyme in real-time.

Transcreener NUDT5 Assay technology uses a simple but highly effective method that consists of an antibody selective to AMP over a far-red fluorescent tracer. AMP produced in the reaction competes with the tracer changing the fluorescent properties and providing fluorescent readout.

The NUDT5 assay is available with FP and TR-FRET. It is a simple mix-and-read format. Perform your enzyme reaction, add the detection reagent, and measure. The simplicity of the system yields robust results that also makes it extremely amiable to HTS.

For customers who prefer TR-FRET detection. Uses the same filter set as HTRF®

Run your enzyme reaction, add Transcreener reagents, and read your plates. The NUDT5 assay is compatible with 96, 384, and 1536-well formats. 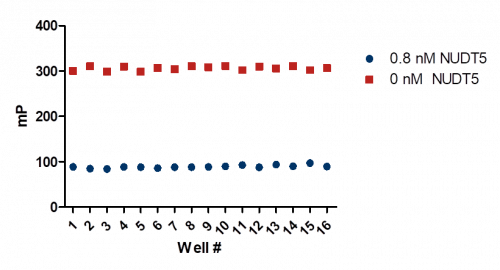 The assay demonstrates linearity when raw data is converted to AMP using a standard curve. NUDT5 can use different substrates.  ADPR at 100 μM starting concentration is shown here under initial velocity conditions. The enzyme reaction occurred for 60 minutes at room temperature. 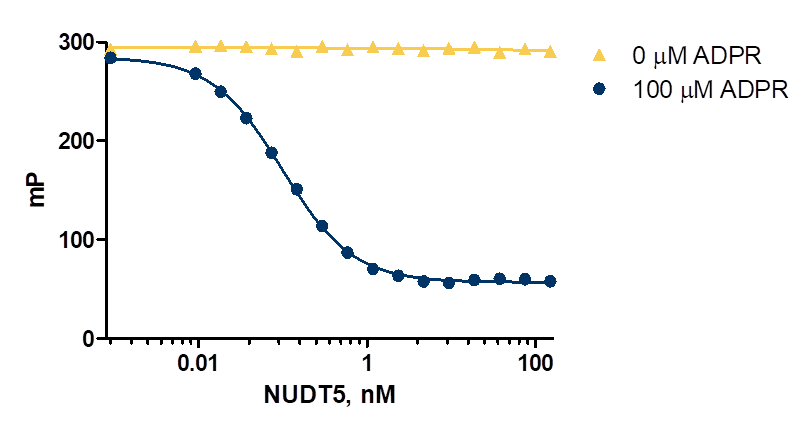 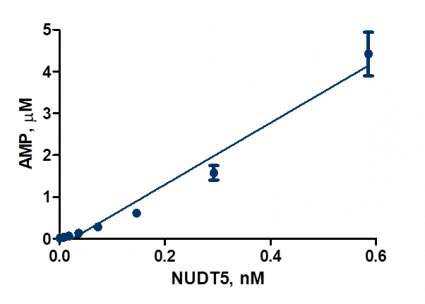 Transcreener Assays are designed for screening compound libraries in a high throughput format. Follow up SAR can also be performed using the assay to determine inhibitor potency with ease. 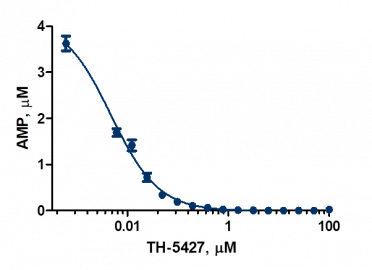 Interested in moving your program forward, but don't want to bring an assay in-house? Our scientists can help! BellBrook scientists will use their extensive biochemistry and enzymology expertise to work with you and accelerate your NUDT5 program.

The Role of NUDT5 As a Therapeutic Target

NUDIX hydrolases, a superfamily of enzymes, hydrolyze modified nucleoside diphosphates. NUDT1 is one of the most well-studied NUDIX hydrolases with correlation to several disorders including Parkinson's disease and cancer. NUDT5 recently attracted interest due to linkage to some human malignancies. NUDT5 hydrolyzes 8-OH-dGDP, 8-OH-dADP, and ADP-ribose (ADPR) along with other substrates.

The Transcreener AMP2 Assay is an excellent tool for researchers examining the therapeutic effects of NUDT5.

The Advantages of the Transcreener Phosphodiesterase Assay 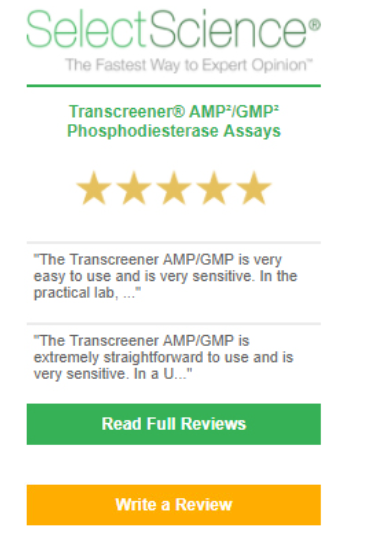