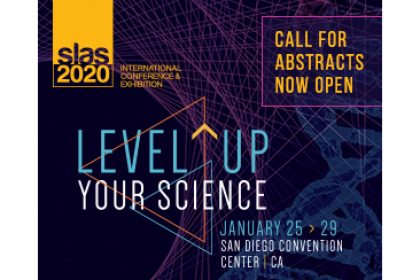 BellBrook Labs will exhibit and present posters at the upcoming SLAS 2020 conference in San Diego, CA. At the conference BellBrook will demonstrate applications for its suite of high throughput screening tools, including residence time determination, targeting ENPP1, studying CD73, screening for kinase inhibitors, using Transcreener for a cGAS drug discovery program, and more!

The innate immune response to cancer is initiated by DNA leaking into the cytosol of tumor cells where it binds to the cytoplasmic DNA sensor cyclic GAMP synthase (cGAS) and triggers type I IFN expression via the STING receptor (Stimulator of INterferon-sensitive Genes), leading to activation of tumor-specific T cells.  Ecto-nucleotide pyrophosphatase/phosphodiesterase (ENPP1) has been identified as the primary enzyme responsible for degrading cGAMP and therefore is under intense investigation as a therapeutic target for cancer immunotherapy.   ENPP1 hydrolyzes cGAMP to produce AMP, GMP and pyrophosphate products.  We developed a robust, HTS-compatible enzymatic assay method for ENPP1 using the Transcreener AMP2/GMP2 Assay, a competitive fluorescence polarization immunoassay that enables direct detection of AMP and GMP in a homogenous format.   The monoclonal antibody used in the Transcreener AMP2/GMP2 assay showed more than 104-fold selectivity for AMP and GMP versus cGAMP, indicating that detection of cGAS reaction products would not be compromised by cross-reactivity with the substrate, even if present in vast excess.   A working concentration of 1 pM ENPP1 was determined as optimal for initial velocity detection with a 60 min reaction period, enabling screening with very low quantities of enzyme (e.g., 0.4 ng/well ENPP1 showed little discrimination between various cyclic dinuncleotide substrates tested, with EC50 values ranging from 40, 83 and 168 nM for cdiGMP, cGAMP and cdiAMP, respectively).   A Z’ value of 0.72 was determined using ATP as substrate, indicating a high-quality assay.  In summary, the Transcreener AMP2/GMP2 Assay was validated as a robust assay for measuring ENPP1 activity under typical screening conditions.  Direct detection of the nucleotide products of ENPP1 is advantageous over methods that use coupling enzymes to convert nucleotide or pyrophosphate products to other detectable analytes, as these methods are prone to interference with the coupling enzymes.  The Transcreener AMP2/GMP2 should prove to be a valuable tool for discovery of ENPP1 lead molecules.

Enabling Discovery of cGAS Antagonists with the Transcreener® cGAS Assay

Aberrant activation of the innate immune sensor cyclic GAMP Synthase (cGAS) by self-DNA triggers a type I IFN response that contributes to a growing list of autoimmune and inflammatory conditions, including lupus, age-related macular degeneration (AMD),  inflammatory bowel disease (IBD), and nonalcoholic steatohepatitis (NASH).  Knockout studies in animal models have clearly indicated that inhibiting cGAS is a promising approach for therapeutic intervention.  To enable HTS efforts targeting cGAS, we developed Transcreener-based assays for cGAMP detection; i.e., homogenous (mix-and-read), competitive immunoassays with fluorescence polarization (FP) and time-resolved Förster resonance energy transfer (TR-FRET) signals.  The key assay reagents are antibodies that selectively bind cGAMP in the presence of excess ATP and GTP and tracers that are displaced by cGAMP.  The assays allow direct, quantitative measurement of the cGAS product formation in endpoint or continuous mode without the use of coupling enzymes or secondary detection reagents. Similar to other Transcreener assays, the cGAMP assays have the performance characteristics needed for small molecule screening including sensitivity, robustness (good dynamic range, minimal signal variation), and low levels of compound interference.  Here we show how the assay can be used for a cGAS lead discovery campaign, including screening, confirming hits, triaging non-stoichiometric inhibitors, and characterizing hits by potency and MOA.  We also show a workflow for characterization of inhibitor analogs during hit-to-lead, including measuring potency under ‘physiological’ conditions with human and mouse cGAS, determining the type of inhibition, and using ‘jump-dilution’ to estimate inhibitor residence times.  The Transcreener cGAS assay should prove to be a valuable tool for discovery of novel cGAS antagonists.

Ectonucleotidases are plasma membrane-bound enzymes with externally-oriented active sites that metabolize nucleotides to nucleosides and are crucial for maintaining immune homeostasis. CD73, also known as ecto-5’ nucleotidase, is a GPI anchored cell surface protein that plays a critical role in adenosinergic signaling. CD73 has both enzymatic and non-enzymatic functions in cells. As an enzyme, CD73 catalyzes the hydrolysis of AMP into adenosine and phosphate. Recent studies have shown a key role for adenosine in immunosuppression in the tumor microenvironment with ectonucleotidases emerging as promising immuno-oncology targets, with a number of groups working on small molecule and antibody-based inhibitors. We developed a simple biochemical assay for measuring CD73 activity based on the Transcreener ADP2 Assay. The assay uses Adenosine Kinase as a coupling enzyme to convert adenosine into AMP and ADP in the presence of ATP.  The assay requires only sub picomolar amounts of CD73 with robust detection of Adenosine production (Z’ > 0.7).  Initial pilot screens have demonstrated potential hits while IC50 values determined for a test compound PSB 12379, was consistent with published values.  The homogenous assay uses a far-red fluorescence polarization (FP) or TR-FRET readout. Targeting the CD73 pathway, in combination with other potentially complementary immune pathways, is a potential strategy to help activate an anti-tumor immune response. The availability of HTS-compatible Transcreener assay methods from BellBrook Labs will accelerate the discovery of inhibitors for these ectonucleotidases, such as CD73, that play a role in tumor immunity and other diseases impacted by adenosine signaling.

Thriving and Striving: Living with Progeria and Searching for a Cure