Mutations in the small GTPase K-Ras are one of the most common known molecular drivers of cancer; approximately 30% of all human cancers contain the oncogenic mutant of K-Ras. Tumors containing oncogenic K-Ras are generally less responsive to therapies than other biological subtypes and consequently, patients with these tumors tend to have poorer outcomes.  Directly targeting oncogenic K-Ras with small molecules has proven particularly difficult for a number of reasons.

To start with, the oncogenic mutations inactivate the GTPase activity of the protein, locking it into the GTP bound, activated state.  So the traditional approach of inhibiting enzymatic activity is not an option.  And even preventing binding of GDP to Ras with a competitive inhibitor is extremely challenging because of its extremely high binding affinity and high cellular concentration.  Efforts to block communication with downstream effectors by disrupting protein-protein interactions have been met with limited success.  In the hopes of overcoming these hurdles, two recent studies, one from a group led by Kenneth Westover at UT southwestern and the other from Kevan Shokat and colleagues at UCSF, propose novel approaches to targeting oncogenic Ras.

Two structurally dynamic loops, switch I and switch II, make up a key portion of the binding interface between K-Ras and numerous downstream effectors.  Both the Westover and Shokat groups hypothesized that, to be successful, direct-acting K-Ras inhibitors must alter the conformation of switch I and/or II to the point that it becomes incapable of transmitting activating signals.  Both groups were successful in achieving this, though apparently through different mechanisms.

Both groups targeted the G12C oncogenic mutation of Ras, which avoids disruption of signaling by the wild type protein.  Westover and colleagues used a rational design approach to develop an inhibitor, SML-8-73-1, that binds covalently to G12C in the guanine nucleotide site.  Their high resolution structure of the K-ras G12C/SML-8-73-1 complex showed K-Ras in an inactive conformation, and in situ proteomic-based chemical profiling showed that the compound was highly selective for K-Ras G12C over other small GTPases.   The group used a chemosensor-based assay to measure the reaction rates between K-Ras G12C and SML in the presence of GTP and GDP.  The results demonstrate that SML is able to efficiently compete, and indeed successfully overcome GTP and GDP in the battle for binding to the guanine nucleotide site.

Targeting the same G12C mutant of Ras, Shokat and colleagues used a structure guided approach to develop compounds that switch the nucleotide binding preference from GTP to GDP, which leads to the accumulation of Ras in the inactive state.  Interestingly, though specific for the G12C mutant, their compounds do not bind at the guanine nucleotide binding site, but instead at an allosteric pocket located beneath the effector binding switch II region that was not apparent in previous structures of Ras.  Like the covalent G12C binding inhibitor, SML-8-73-1, the Shokat group’s compounds render K-Ras in the open conformation which is inactive with downstream effectors.

While continued chemical optimization and future assessment of the compounds in vivo is needed, Shokat and colleagues report that intitial evaluation of their compounds in lung cancer cell lines suggest allelespecific impairment of K-Ras function.  The two groups believe that their findings can serve as a starting point for drug discovery efforts targeting K-Ras and hope that, eventually, the approach may be generalized to other GTPases.

A surprising aspect of these parallel discoveries is how much we apparently did not know about one of the most intensively studies proteins in all of biology, and a small one (20 KDa) at that.  One lesson may be that leveraging conformational dynamics can yield druggable sites on seemingly intractable protein targets. 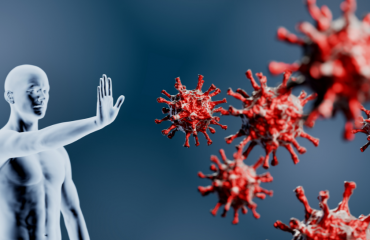 OAS1: The Cost of Host Defense