PI3K Inhibitors and Cancer – Although cancer is widespread, determining the culprit, as well as individual treatment, is challenging. A variety of cancer types exist with a multitude of contributors. Being the most common human genetic disease, a whole host of genes are involved. Some contribute to curbing cancer (tumor suppressor genes), while oncogenes promote it. Many of these genes and their specific role in cancer have been identified. Phosphatidylinositol-4,5-bisphosphate 3-kinase catalytic subunit alpha (PI3Kα) is one of the most frequently mutated oncogenes in cancer with mutations often found in patients with breast cancer.2  In fact, double PI3Kα mutations where two different mutations are found in one allele occur frequently in breast cancers among other cancers.

Oncogenic mutations can lead to the gene being constitutively activated.3 With the range of important functions that PI3Kα has a hand in including cell growth, migration, material transport, cell survival, and production of new proteins, it’s no wonder how mutated versions of the gene lead to cancer. It does this by encoding for the catalytic subunit of phosphoinositide 3-kinase (PI3K); p110 alpha (p110α) protein. PI3K phosphorylates signaling molecules triggering a series of downstream reactions that allow for the aforementioned functions.3

PI3Kα  inhibitors such as alpelisib have been on the market as a treatment for hormone receptor-positive breast cancer with mutations in PI3Kα. Researchers from a large group including Memorial Sloan Kettering Cancer Center recently published a paper on these findings in Science. Aided by the Transcreener® ADP² Kinase Assay recently identified cancers with double PI3Kα mutations specific to the cis region of the gene compared to the trans region are even more sensitive to PI3Ka inhibitors.3 Linking individual genetics in this way is a powerful means of therapy with the added benefit of specificity.

The scientists used the Transcreener Assay to determine IC50 values for PI3K inhibitors with recombinant PI3Kα.3 The ability of PI3Kα to transfer a phosphate from ATP to another molecule (or substrate), forming ADP as a product was measured via fluorescence intensity (FI). More product increases the FI as the tracer and quencher move further in proximity.  The reaction contains a quenched ADP Alexa Fluor® 594 tracer bound to an ADP antibody conjugated to an IRDye® QC-1 quencher. Making the assay unique, it detects the activity of most kinases including serine/threonine protein kinases both as an endpoint or continuous assay.

The discovery is exciting news for those interested in pharmacogenetics and especially those suffering from breast cancer. Moreover, it’s an ideal way to utilize the Transcreener ADP² Assay. 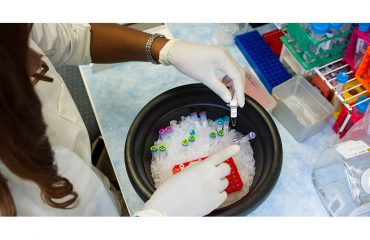